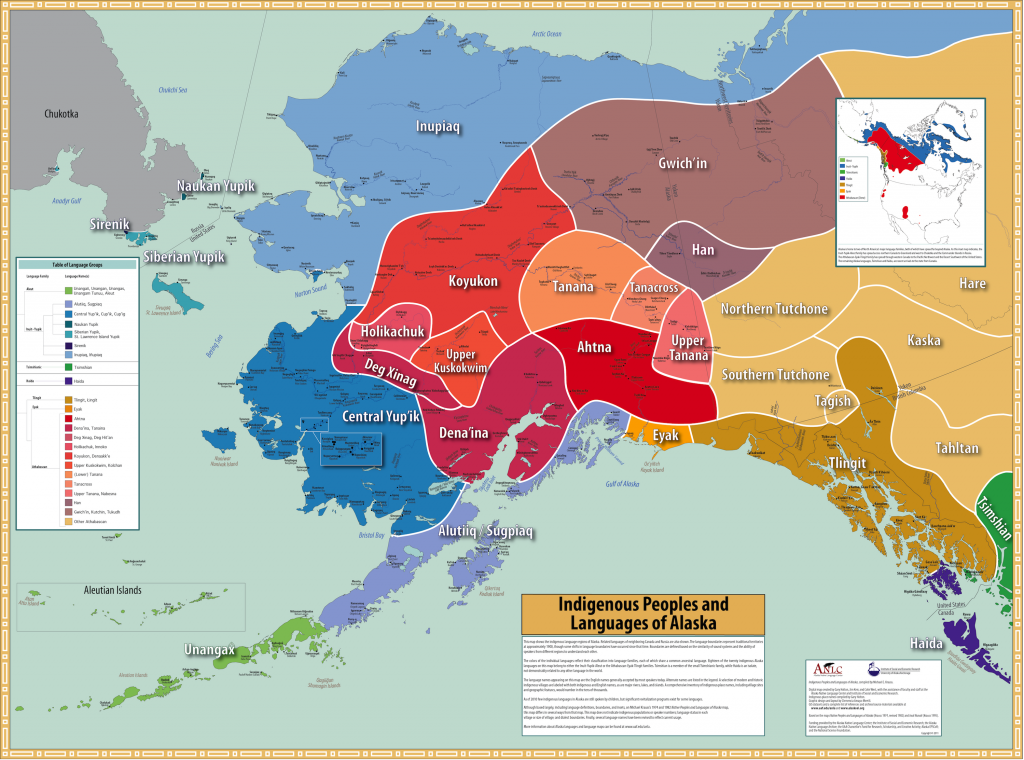 The Gwich’in language is traditionally spoken in northeastern Alaska, and in northwest Canada in the Yukon and Northwest Territories. In Alaska, Gwich’in communities include VashrÄ…Ä¯Ä¯ K’Ç«Ç« (Arctic Village), VÄ¯Ä¯htÄ…Ä¯Ä¯ (Venetie), Gwichyaa Zhee (Fort Yukon), JaÅ‚giitsik (Chalkyitsik), Tseenduu (Beaver), Danzhit KhÄ…Ä¯Ä¯nlÄ…Ä¯Ä¯ (Circle), and Deenduu (Birch Creek). On the Canadian side are the communities of Van Tat (Old Crow), TeetÅ‚’it Zheh (Fort McPherson), Tsiigehtchik (Arctic Red River), Aklavik and Inuvik. Today many Gwich’in speakers also make their home in the urban centers of Tanan (Fairbanks), and Anchorage in Alaska, or Whitehorse in the Yukon Territory, and around the world.

Within a language there is variation in ways of speaking, usually based on a group of speakers’ background or region. This is called a dialect. Within all languages, including the Athabascan languages, there may be dialects.

Gwich’in is primarily spoken in 9 communities in northeastern interior Alaska and northwestern Canada. In Alaska, speakers can be found in other areas such as the larger cities. There are several dialects based on region, including Arctic Village Gwich’in, Fort Yukon Gwich’in, Arctic Red River Gwich’in, Fort McPherson Gwich’in, and Old Crow Gwich’in. Each of these dialects has unique ways of pronouncing the same words or phrases but all dialects of Gwich’in continue to be mutually intelligible. In other words, all Gwich’in speakers, no matter what dialect they speak, can converse with one another and still understand one another.

For example, let us see how Gwich’in would say ‘my mother’ in the following dialects of Gwich’in:

Historically,  the Gwich’in language was not a written language, as all information was passed to the next generation through speaking. Gwich’in has had a writing system which began in the church in 1860, and is still used by older speakers of the language. Later, around the 1950’s, the Summer Institute of Linguistics (SIL) sent Richard Mueller to work with the Gwich’in in Arctic Village, Venetie, and Fort Yukon where he developed a writing system. Then in the 1970’s, another writing system was developed by the Alaska Native Language Center (ANLC). The Canadians also have two writing systems, which brings the total number of Gwich’in writing systems to five.

Regardless of which system is used,  pronunciation and meaning is the same.

You will see the following writing systems in Alaskan writings:

There are three main differences between the ANLC and Mueller writing systems. These include:

Note: This course is primarily focused on speaking and conversation and there is some overlap and inconsistency between writing styles due to the various locations of content experts. For a more comprehensive course taught with the ANLC writing system, please check out UAF’s Alaska Native Languages Gwich’in course series (ANL 142, ANL 242).

Example of glottal ( ’) placement with y in the Mueller system